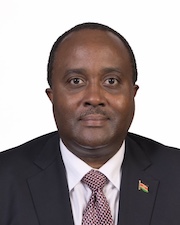 1990 -2002 – Worked with various private local media firms. These included the Daily Nation Newspaper where I was a business and economics news correspondent, Kenya Television Network where I was a business news editor and later Head of News and Take One Productions where I produced informational documentaries for Non- Governmental Organisations aimed at specific target audiences.

Graduate of the University of Nairobi where I was awarded a Bachelor of Arts. Between 1990 and 2002, undertook various study tours on broadcast journalism in the USA, U.K., Germany and China.

2008 –Attended intensive courses on ‘’Managing Political and Economic Transitions in developing countries’’ at the Kennedy School of Government, Harvard University.

2017 –Attended courses on ‘’Communicating in a Political Environment’’ and ‘’The Art of Stakeholder Engagement’’ at the Crawford School, Australia National University.

1993  – Nairobi Stock Exchange – Educating the public on investing in shares.

1995 – Institute for Education in Democracy – Why my vote counts

2007-  Moran of the Burning Spear (M.B.S.) Award honouring my service to the Kenyan public.

1997 – The Kenyan Community Abroad awarded me its first ever award in recognition of my role in promoting the growth of media and democracy in Kenya.

Epilepsy Safe Mode
Dampens color and removes blinks
This mode enables people with epilepsy to use the website safely by eliminating the risk of seizures that result from flashing or blinking animations and risky color combinations.
Visually Impaired Mode
Improves website's visuals
This mode adjusts the website for the convenience of users with visual impairments such as Degrading Eyesight, Tunnel Vision, Cataract, Glaucoma, and others.
Cognitive Disability Mode
Helps to focus on specific content
This mode provides different assistive options to help users with cognitive impairments such as Dyslexia, Autism, CVA, and others, to focus on the essential elements of the website more easily.
ADHD Friendly Mode
Reduces distractions and improve focus
This mode helps users with ADHD and Neurodevelopmental disorders to read, browse, and focus on the main website elements more easily while significantly reducing distractions.