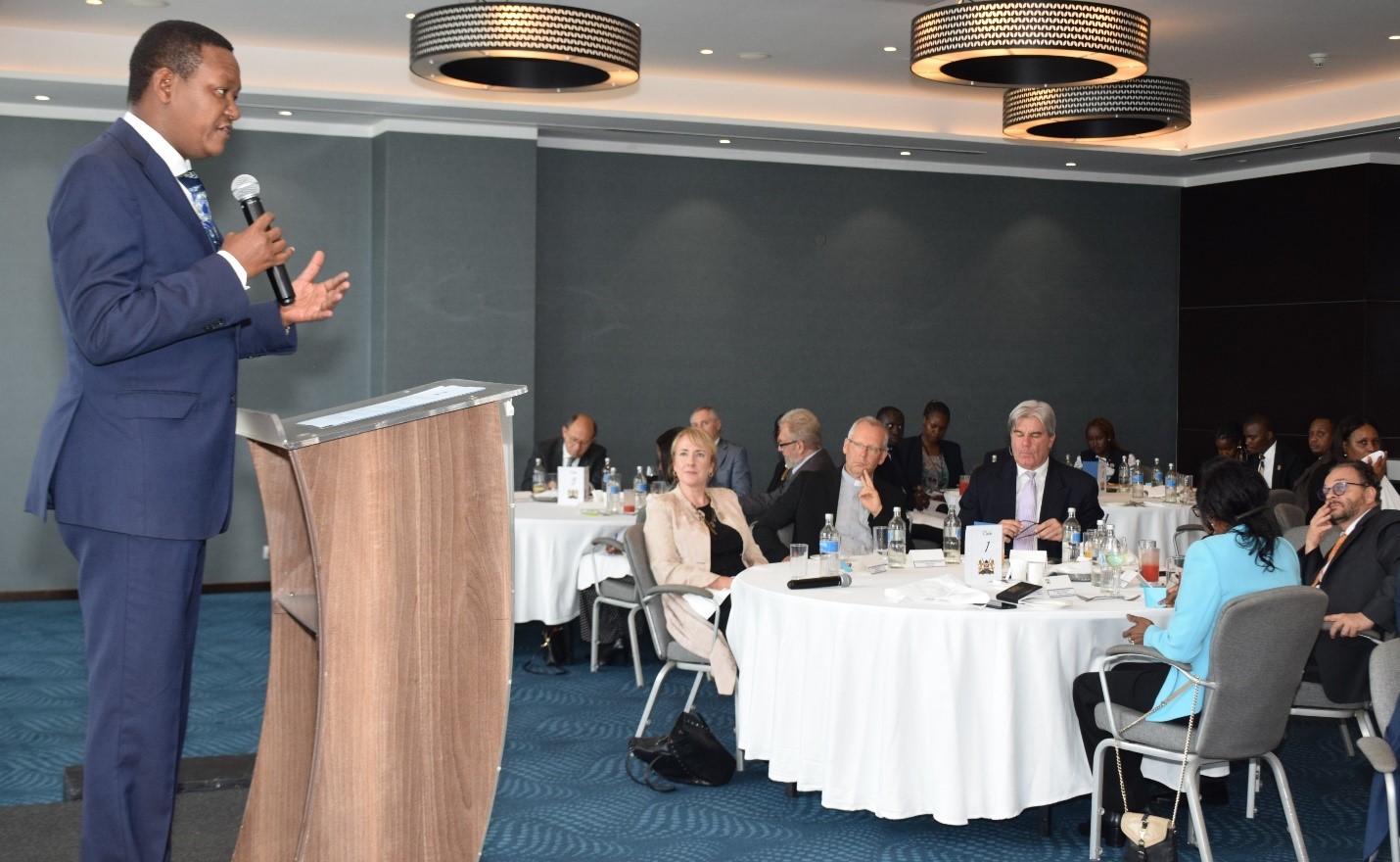 Cabinet Secretary Dr. Alfred Mutua held diplomatic briefing with envoys from the European region on December 5, 2022.  The briefing aimed at providing periodic updates on Kenya’s diplomatic engagements and interaction as well as reflect on matters that contribute to strengthening the lasting relations between Kenya and Europe.

Speaking at the event, CS Mutua said the European region maintains an esteemed position at the core of the Kenya’s Foreign Policy.

“This session is exceptionally dear to me on a personal capacity, given that it is my first convening of the Diplomatic Corps from Europe,” the CS stated, adding that “from the moment I assumed this office, I have been deeply humbled by your repeated interests to schedule meetings with me and my team to discuss ways of furthering the bilateral partnerships between Kenya and your respective countries.”

While recognising the excellent role played by the Dean of the European Diplomatic Corps, H.E. Dragon Zupanjecvac, the Cabinet Secretary thanked the envoys for the messages of goodwill received during the inauguration into office of H.E. William Ruto and expressed gratitude for compliments on his own appointment as Cabinet Secretary for Foreign and Diaspora Affairs.

The CS called on the support and participation of all development partners in order to achieve the ambitious transformative agenda set by President Ruto that aims to improve the standards of living of all Kenyans and set the country on the desired economic trajectory.

On bilateral and economic relations between the two countries, Dr. Mutua appreciated the commitment by the European Countries in expanding bonds forged since independence that has led to friendly ties that continued to strengthen over the years through enhanced economic, cultural, educational and diplomatic exchanges.

On Peace and Security, the CS said Kenya continues to execute continental and regional mandates at the United Nations Security Council saying that this informs Kenya’s engagement and commitment to peace initiatives in Eastern Democratic Republic of Congo.  This therefore signifies Kenya’s role as a guarantor of regional peace and security, which dovetails with the tenets of the African Union’s declaration on Silencing the Guns in Africa.

On Climate Change, the CS called on the support of partners to collectively shape and finance climate adaptation initiatives in Africa and respond to the climate security nexus.  He noted that Africa is the least responsible for the climate change crisis yet it finds itself at the epicenter of its worst impacts.

As a mitigation measure, Kenya has committed to planting more than 5 billion trees in the next five years and a total of 15 billion trees in 10 years. “We have an obligation to safeguard our continent and its future generations and the time is now,” CS Mutua stated.

The CS informed the envoys that intense droughts continue to affect the Horn of Africa due to severe weather experienced this far resulting in huge implication for food security and agricultural systems. He informed that some parts of Kenya have been severely affected and called on the envoys to partner with Kenya to address the drought impacts through the provision of food, medicines and water to reach the most affected population.

Kenya is keen to be a partner to address food insecurity, global health, youth unemployment, peace and security, sustainable and just transition through common commitment to multilateralism, democracy, peace building dialogue and mediation to end intolerable and unnecessary human suffering.

In order to ensure concrete deliverables aimed at deepening the bilateral engagement between Kenya and European countries and ensuring that a result-oriented partnership benefits the people, the Ministry is keen to ensure that the existing bilateral Agreements and MOUs are continually reviewed and updated for maximum mutual benefit.

CS Mutua assured the envoys of his desire and willingness to work closely with each and every one of them and to help them achieve their objectives while in Kenya. 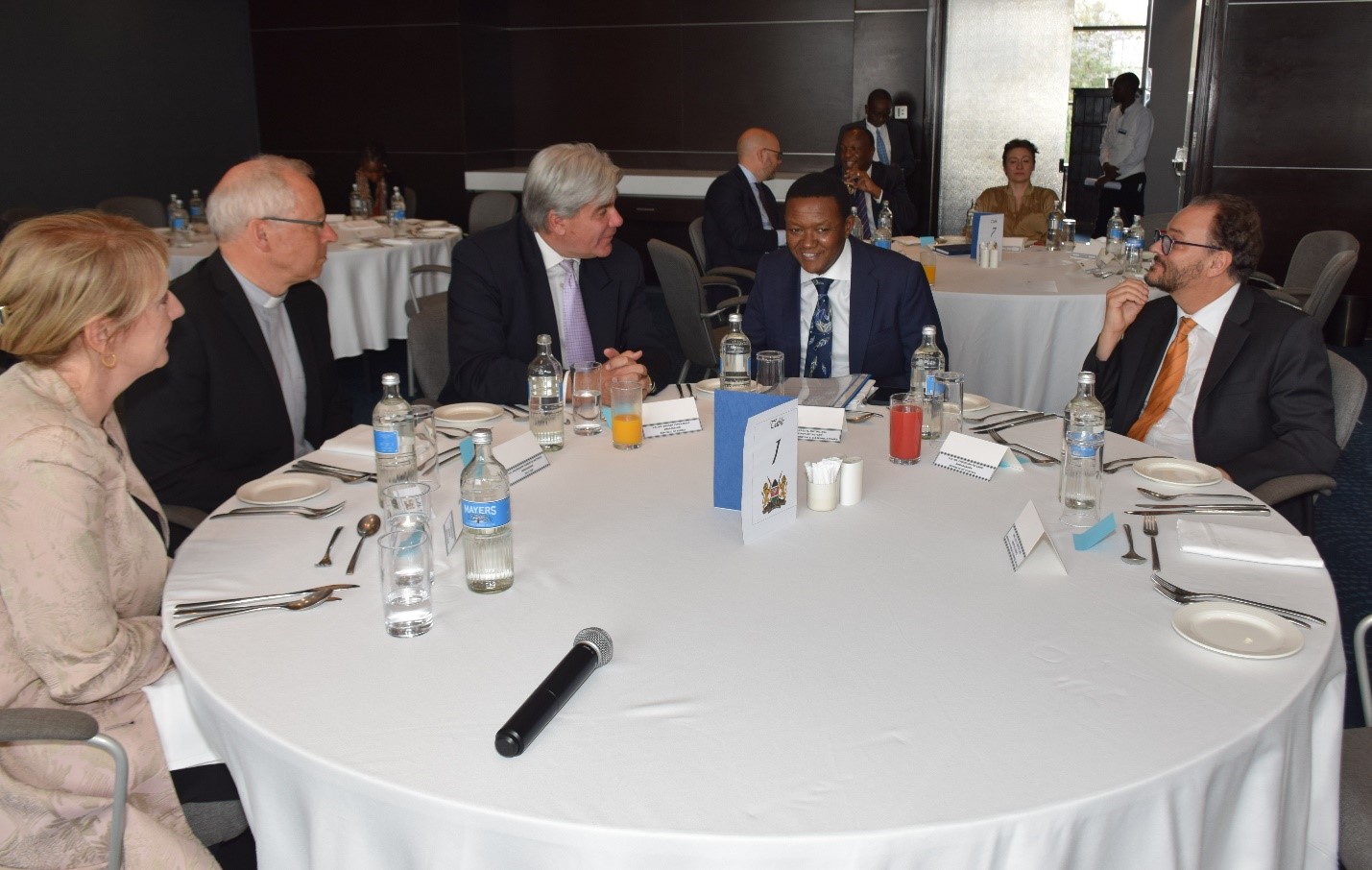 December 9, 2022
Epilepsy Safe Mode
Dampens color and removes blinks
This mode enables people with epilepsy to use the website safely by eliminating the risk of seizures that result from flashing or blinking animations and risky color combinations.
Visually Impaired Mode
Improves website's visuals
This mode adjusts the website for the convenience of users with visual impairments such as Degrading Eyesight, Tunnel Vision, Cataract, Glaucoma, and others.
Cognitive Disability Mode
Helps to focus on specific content
This mode provides different assistive options to help users with cognitive impairments such as Dyslexia, Autism, CVA, and others, to focus on the essential elements of the website more easily.
ADHD Friendly Mode
Reduces distractions and improve focus
This mode helps users with ADHD and Neurodevelopmental disorders to read, browse, and focus on the main website elements more easily while significantly reducing distractions.