KENYA PARTICIPATES IN THE CHOGM 2022

Commonwealth leaders travelled to Rwanda to reaffirm their common values and agree on actions and policies to improve the lives of all their citizens.  His Excellency President Uhuru Kenyatta was among the High Profile Delegates that also brought together Presidents, Prime Ministers and their representatives from 54 Commonwealth Nations across Africa, Asia, the Caribbean, the Pacific and Europe. 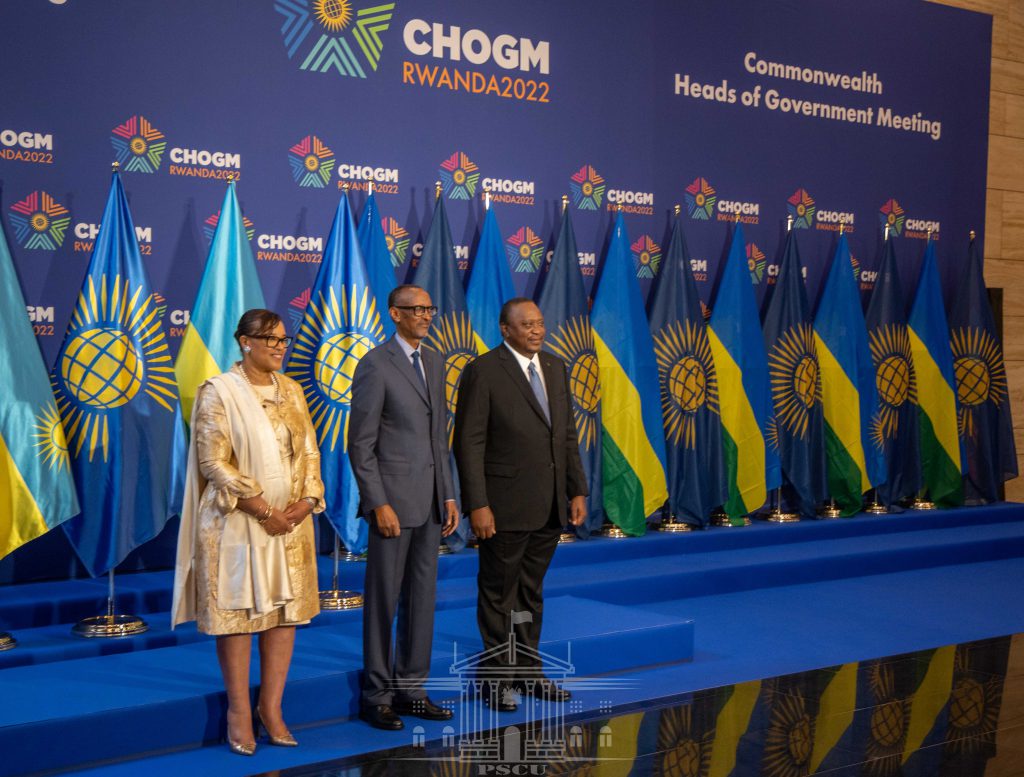 The Commonwealth Heads of Government Resolutions reaffirmed their shared commitment to continue working with the United Nations, other international and regional organisations and International Financial Institutions (IFIs) in their responses to COVID-19 pandemic, new threats to economic security and political instability.

The Heads of Government reaffirmed support for the Good Offices role of the Secretary-General as a mechanism to protect and promote the Commonwealth’s fundamental values and principles, and also underscored that measures taken to address the COVID-19 pandemic should be targeted, necessary, transparent, non-discriminatory, time-bound, and proportionate.

Amb. Raychelle Omamo, Cabinet Secretary for Foreign Affairs led a Kenyan delegation to the Commonwealth Foreign Ministers Meeting. On the sidelines, the CS met the Minister for Foreign Affairs of Belize, Hon. Eamon Courtenay during which the two countries signed a historic joint communiqué for the establishment of diplomatic relations between the two friendly countries. Belize sought to expand its engagement with Africa and UN agencies and multilateral organizations in Nairobi. As a result, Kenya is set to host more resident diplomatic missions for Caribbean States. This followed the formalization of diplomatic relations between Kenya and two additional CARICOM members; Belize, and Antigua and Barbuda.

The Cabinet Secretary also met with her counterparts from Nigeria, Sri Lanka, New Zealand, India, Canada, Jamaica, Seychelles, Commonwealth of Dominica and Tonga to reaffirm the commitment to stronger bilateral relations and closer cooperation at the multilateral level including UNSC. Accordingly, the discussions focused on the wide ranging cooperation in the areas of trade and investment, people-to-people exchanges, security and sustainable development.

Amb. Omamo also held talks with Samoa’s Prime Minister Hon. Fiamē Naomi Mataʻafa. They reaffirmed the strong bilateral relations between Kenya and Samoa and discussed enhancing cooperation in the multilateral arena. Samoa was eventually confirmed as the 2024 host of the event –  the first time a Pacific member country will host CHOGM.

August 2, 2022
Epilepsy Safe Mode
Dampens color and removes blinks
This mode enables people with epilepsy to use the website safely by eliminating the risk of seizures that result from flashing or blinking animations and risky color combinations.
Visually Impaired Mode
Improves website's visuals
This mode adjusts the website for the convenience of users with visual impairments such as Degrading Eyesight, Tunnel Vision, Cataract, Glaucoma, and others.
Cognitive Disability Mode
Helps to focus on specific content
This mode provides different assistive options to help users with cognitive impairments such as Dyslexia, Autism, CVA, and others, to focus on the essential elements of the website more easily.
ADHD Friendly Mode
Reduces distractions and improve focus
This mode helps users with ADHD and Neurodevelopmental disorders to read, browse, and focus on the main website elements more easily while significantly reducing distractions.