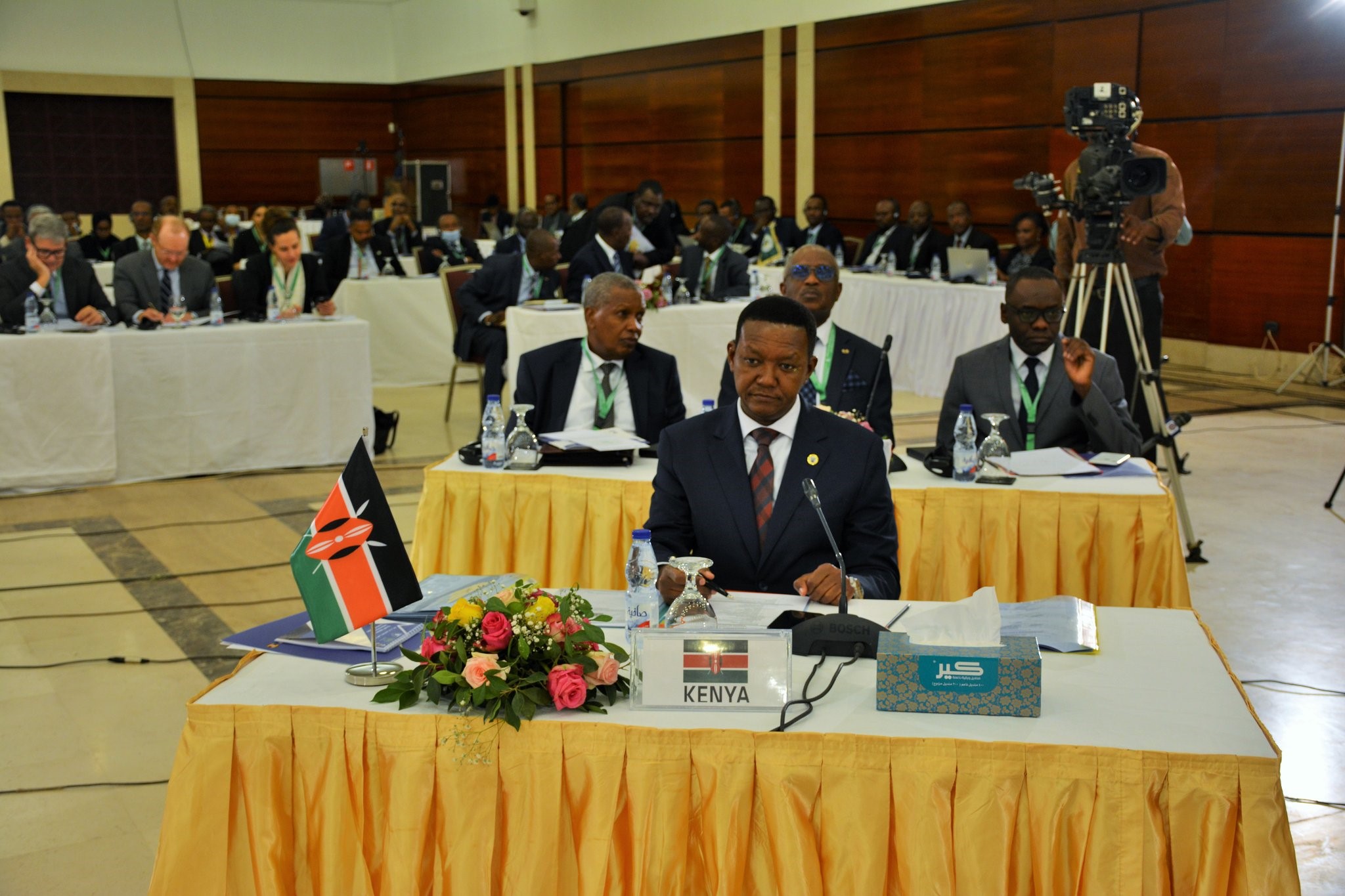 CS Dr. Alfred Mutua participated at the 48th Ordinary Session of the Intergovernmental Authority on Development (IGAD) Council of Ministers, in Khartoum, Sudan on November 30, 2022.

Foreign and Diaspora Affairs Cabinet Secretary Dr. Alfred Mutua participated at the 48th Ordinary Session of the Intergovernmental Authority on Development (IGAD) Council of Ministers that took place in Khartoum, Sudan on November 30, 2022.  The meeting comprising of Ministers of Foreign Affairs of the seven Member States took place under the chairmanship of the Republic of Sudan.

In attendance were Ministers of Foreign Affairs from Sudan, Djibouti, Ethiopia, Somalia and South Sudan. Uganda was represented by its Ambassador in Sudan. IGAD Secretariat, led by Executive Secretary Mr. Workneh Gabeyehu were also present.  Italy, which co-chairs the IGAD Partners Forum and representatives from the European Union and the United States of America also attended.

In his speech, Dr. Alfred Mutua acknowledged the congratulatory messages received from his colleagues on his appointment and expressed his gratitude on joining the Council.  The CS thanked his Sudanese counterpart and Chair of the Ministerial meeting for his invitation to participate in the meeting, noting that the 48th session creates an opportunity for members to deliberate on strategies and issues of shared interest.

Dr. Mutua recognised the continental leadership and institutions that continue to make progress in the African Union (AU) – led Tigray conflict peace talks, noting that the negotiations had led to the signing of the permanent cessation of hostilities on November 2, 2022 in Pretoria and the Commanders’ agreement signed Nairobi on November 12, 2022 in Nairobi.  He also welcomed the recent positive developments on peace in Sudan, Somalia and South Sudan, saying that if maintained would translate to gradual sustainability of peace, security and development in the region.

On Security matters, Dr. Mutua noted that terrorism and violent extremism fueled by radicalization have emerged as major threats to peace and security in the region.

“Our region continues to be a major target for terrorists due to our geo-strategic location and our commitment in the fight against terrorism.” CS Mutua said.  He emphasized on the need for continued collaboration and coordination through regional counter-terrorism cooperation and investigation, prosecution as well as incident response.

The CS said Kenya was a global champion on climate change in Africa and urged other IGAD Member States to double their efforts in addressing the alarming threat for a climate resilient region, and to mobilize the global community to honour their numerous commitments on addressing climate change.

While reaffirming Kenya’s solidarity with all IGAD Member States in their pursuit for sustainable solutions to long lasting peace, security and development in the region, Dr. Alfred Mutua called on his colleagues to give unreserved contribution and support to the organisation to ensure absolute implementation of its mandate. He also welcomed the establishment of the IGAD Leadership academy to be hosted by Kenya.

The Executive Secretary gave the Council a regional situation report and the report of the IGAD Experts Meeting. He also briefed the session on the Organization’s progress on projects, institutional reforms as well as administrative and financial status of its programmes. The Council was also informed of the current political and security status in the Horn of Africa including the recent progress in the Ethiopia Peace Process.

IGAD Partners present called for sustainable economic integration in the Horn of Africa, lauding the efforts made by IGAD in addressing specific economic and development challenges.

The session concluded with the launch of the IGAD Scholarships Programme and a signing ceremony of the IGAD Protocols for Free Movement and Transhumance.

December 9, 2022
Epilepsy Safe Mode
Dampens color and removes blinks
This mode enables people with epilepsy to use the website safely by eliminating the risk of seizures that result from flashing or blinking animations and risky color combinations.
Visually Impaired Mode
Improves website's visuals
This mode adjusts the website for the convenience of users with visual impairments such as Degrading Eyesight, Tunnel Vision, Cataract, Glaucoma, and others.
Cognitive Disability Mode
Helps to focus on specific content
This mode provides different assistive options to help users with cognitive impairments such as Dyslexia, Autism, CVA, and others, to focus on the essential elements of the website more easily.
ADHD Friendly Mode
Reduces distractions and improve focus
This mode helps users with ADHD and Neurodevelopmental disorders to read, browse, and focus on the main website elements more easily while significantly reducing distractions.