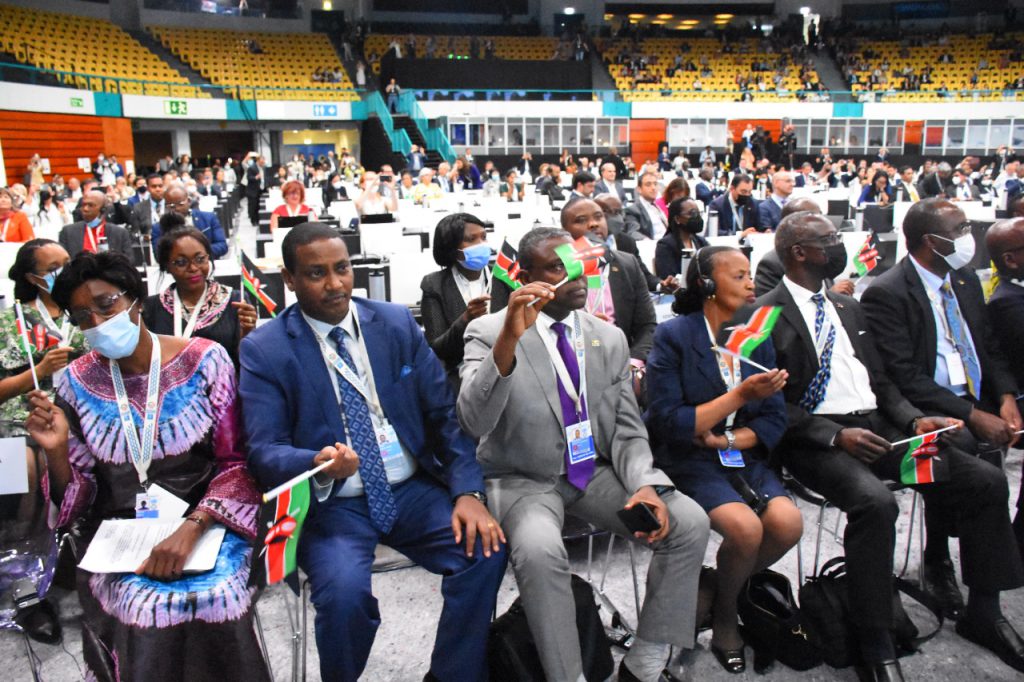 The Conference themed, “Scaling Up Ocean Action Based on Science and Innovation for the Implementation of Goal 14:  Stocktaking, Partnerships and Solutions” was the second of its kind to take place. The week-long Conference brought together world leaders who pledged to take action to save the ocean through conservation of oceans, seas and marine resources.

The Conference whose main objective was to ‘Support the Implementation of Sustainable Development Goal 14: Conserve and sustainably use the oceans, seas and marine resources for sustainable development’ brought together Heads of State and Government, High- Level Representatives of Global and International organizations, High-Level Climate Champions representatives of civil society organizations and other climate stakeholders.

Speaking at the Opening of the conference, H.E Uhuru Kenyatta called   for urgent global action to mitigate the decline in seas, ocean and marine environment, saying the world needed to upgrade from proposals on the subject to tangible interventions. He called on world leaders to jointly work together in the scaling up of conservation action to help solve challenges facing sustainability and health of global maritime resources.

“Our actions are not commensurate with the threat that faces the ocean. We urgently need to build an ocean-based economy where effective protection, sustainable production and equitable prosperity go hand-in-hand. These actions must be taken collectively because the ocean is a global common good,” President Kenyatta said.

The President noted that human action continues to threaten the ocean and its eco systems, pointing out that more than eight million tons of plastic are dumped in the marine environment annually while dumping of toxic waste into the water was altering and destroying marine ecosystems.

“Our actions are not commensurate with the threat that faces the ocean. We urgently need to build an ocean-based economy where effective protection, sustainable production and equitable prosperity go hand-in-hand. These actions must be taken collectively because the ocean is a global common good,” President Kenyatta said.

The High-Level opening was also addressed the Presidents of Angola, Palau, Columbia, Guinea -Bisau, Zambia, Ghana, Equatorial Guinea and the State of Libya, Prime Ministers of Portugal and the Republic of Iceland as well as the President of the seventy -sixth session of the United Nations General Assembly.

Through the Declaration “Our Ocean, Our Future, Our Responsibility”, world leaders pledged to decisively address the decline of ocean and its resources as a way of achieving sustainable development goal 14.

“As leaders and representatives of our governments, we are determined to act decisively and urgently to improve the health, productivity, sustainable use and resilience of the ocean and its ecosystems,” they said, expressing deep regret over their collective failure to achieve several of the targets of Goal 14 noting that it was the least funded sustainable development goal.

Highlighting over exploitation of the ocean and its habitat as a key contributor to the oceans decline, leaders in the conference called on collective commitment to scaling up ocean based science. They pointed to decisive and realistic actions needed to strengthen institutional capacity and ocean literacy for long term sustainability of the oceans.

Kenya’s National Statement and closing remarks at the Ocean Conference were delivered by Mr. Keriako Tobiko, Cabinet Secretary for Environment and Forestry. CS Tobiko echoed the intricate link between a healthy planet and a healthy ocean, informing that Kenya has recently developed a National Marine Litter Management action plan in fulfilment of UNEA 1. He lauded the country’s commitment to developing a National Action Plan on Sea Based Marine Plastic Litter which he said will be tailored to address gaps, priorities and needs, to more effectively prevent and reduce marine plastic litter from sea-based resources.

The second United Nations Oceans Conference was closed in a colourful flag lowering ceremony on Friday, July 1, at the Altice Arena. The closing ceremony featured a cultural extravaganza of music and dance by one of Kenya’s leading band Kayamba Africa. The global forum hosted close to six thousand delegates from around the world.

August 2, 2022
Epilepsy Safe Mode
Dampens color and removes blinks
This mode enables people with epilepsy to use the website safely by eliminating the risk of seizures that result from flashing or blinking animations and risky color combinations.
Visually Impaired Mode
Improves website's visuals
This mode adjusts the website for the convenience of users with visual impairments such as Degrading Eyesight, Tunnel Vision, Cataract, Glaucoma, and others.
Cognitive Disability Mode
Helps to focus on specific content
This mode provides different assistive options to help users with cognitive impairments such as Dyslexia, Autism, CVA, and others, to focus on the essential elements of the website more easily.
ADHD Friendly Mode
Reduces distractions and improve focus
This mode helps users with ADHD and Neurodevelopmental disorders to read, browse, and focus on the main website elements more easily while significantly reducing distractions.