Kenya and Bangladesh have signed two Memoranda of Understanding (MOUs) on Political Consultations and between the Foreign Service Academies of the two countries.

The MOUs were signed in Dhaka, Bangladesh by Amb. Moi Lemoshira, Director General, Bilateral and Political Affairs for the Republic of Kenya and Amb. Masud Bin Momen, Foreign Secretary, Ministry of Foreign Affairs for the Government of the People’s Republic of Bangladesh. The MOUs seek to cement the bonds of friendship that exist between the two countries.

The Political Affairs agreement will establish a framework for regular and active diplomatic consultations between the two countries through reviewing progress in bilateral cooperation and identifying new areas of mutual benefit.

The MOU on consultations will particularly allow for frequent exchange of views on bilateral matters as well as regional and international issues.  The Foreign Service Academy agreement is aimed at sharing expertise; exchange of teaching modalities; encouragement of study and research; exchange of experts and faculty members; arrangement of programmes and exploring newer prospects.

Earlier in the day, Kenya and Bangladesh held the inaugural Foreign Office Consultations at the Foreign Service Academy in Dhaka. The outcome of this historical bilateral meeting forms the basis for renewed bilateral relations and structured engagement between Nairobi and Dhaka.

The highly successful meeting agreed to prioritize trade and investment cooperation and in this regard undertook to negotiate and conclude a revised Joint Commission for Cooperation arrangement, Bilateral Agreements on Avoidance of Double Taxation, among other business-friendly measures.  The two delegations also reaffirmed mutual commitment to closer partnership in climate change, blue economy, renewable energy, tourism and agriculture.

The countries agreed to immediate exchange of visits by technical teams and business representatives to formalize and fast track action to promote common interests. 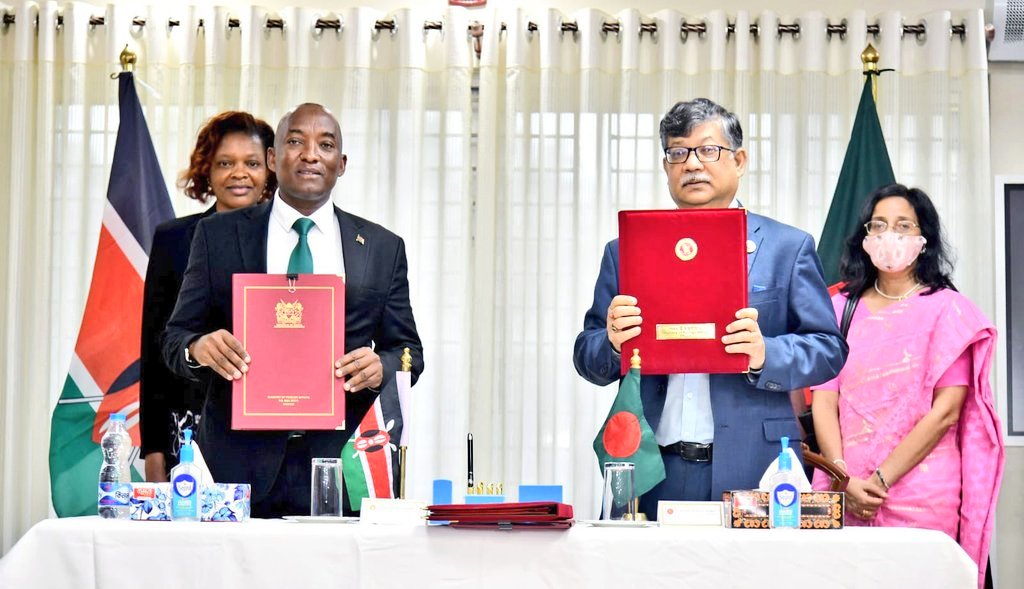 Speaking to the Bangladesh Press after the meeting, Amb. Lemoshira stated that the inaugural session presents an opportunity to discuss in-depth issues of mutual benefits and identify new areas of future cooperation especially in the areas of double taxation, ICT and Agriculture.

Kenya and Bangladesh have maintained warm and cordial longstanding diplomatic relations since the independence of Bangladesh in 1975. Bangladesh established its resident diplomatic representation in Nairobi since 1978 while Kenya’s High Commission New Delhi is accredited to Dhaka.  Kenya has appointed a Honorary Consul based in Dhaka Mr. Shafiullah Rana, a leading entrepreneur with business interests in various sectors.

The Kenyan team will also engage the Bangladesh business organizations including the national Chamber of Commerce and Industry during which they will present the case for trade and investment.

August 11, 2022
Epilepsy Safe Mode
Dampens color and removes blinks
This mode enables people with epilepsy to use the website safely by eliminating the risk of seizures that result from flashing or blinking animations and risky color combinations.
Visually Impaired Mode
Improves website's visuals
This mode adjusts the website for the convenience of users with visual impairments such as Degrading Eyesight, Tunnel Vision, Cataract, Glaucoma, and others.
Cognitive Disability Mode
Helps to focus on specific content
This mode provides different assistive options to help users with cognitive impairments such as Dyslexia, Autism, CVA, and others, to focus on the essential elements of the website more easily.
ADHD Friendly Mode
Reduces distractions and improve focus
This mode helps users with ADHD and Neurodevelopmental disorders to read, browse, and focus on the main website elements more easily while significantly reducing distractions.