Riyadh, Saudi Arabia, March 13, 2022 (MFA Press) …… Kenya and Saudi Arabia continue to build upon the longstanding warm and cordial bilateral relations underpinned by historical ties over the years.
The first session of the Joint Commission for Cooperation (JCC) between the two countries was held in Riyadh, Kingdom of Saudi Arabia from March 9 to 12, 2022. Senior Officials from the two countries met to deliberate on salient areas of interest in socio-economic development that are of key importance to both countries. 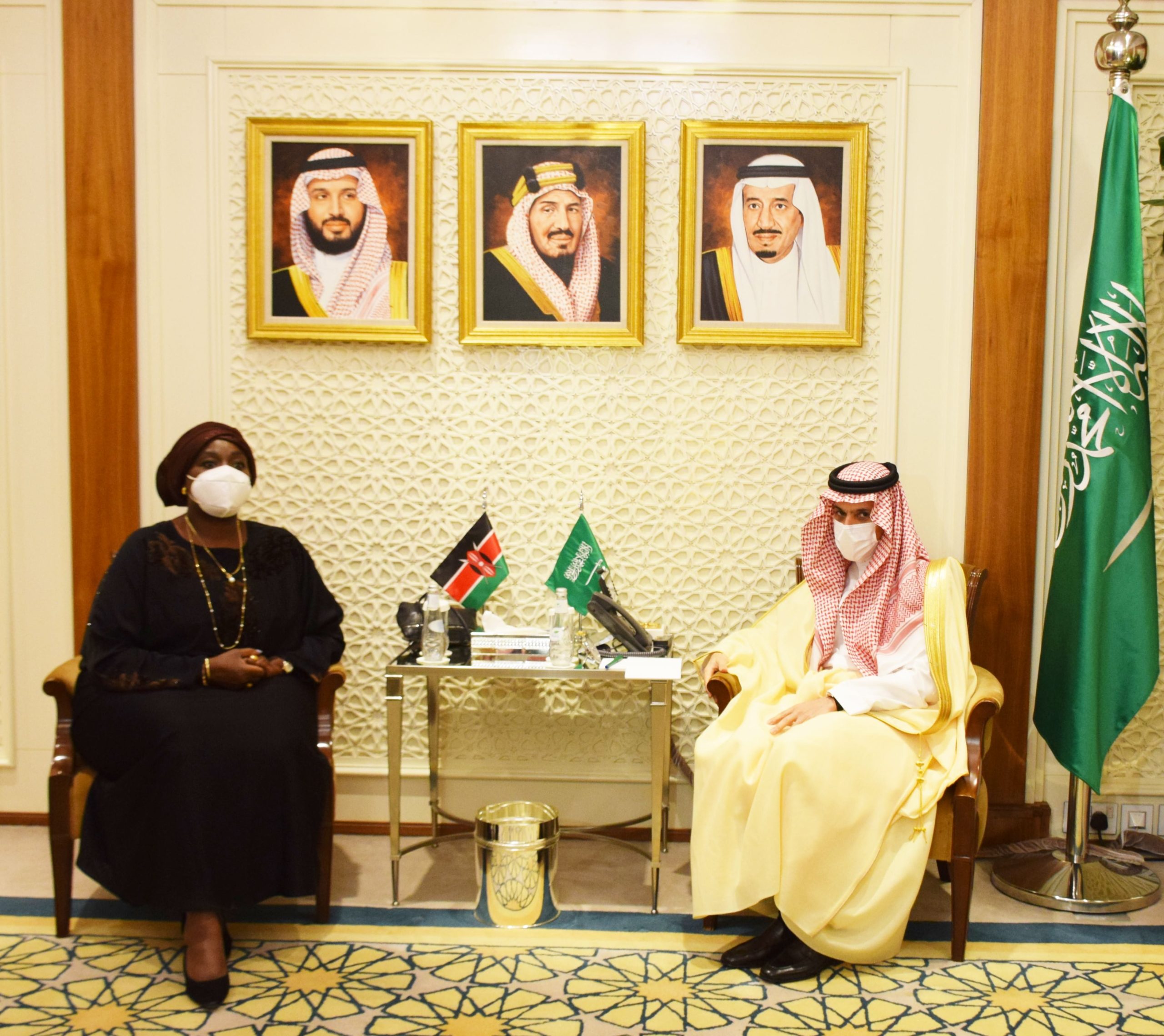 On invitation of the Government of the Kingdom of Saudi Arabia, Amb. Raychelle Omamo, Cabinet Secretary, Ministry of Foreign Affairs Kenya led the Kenyan delegation for the JCC. His Highness the Minister of Foreign Affairs Prince Faisal bin Farhan Al Saud, led the Saudi Arabian Delegation.
During a bilateral meeting, held on March 13, 2022 between the two Foreign Ministers, different aspects of cooperation and matters of mutual interest aimed at advancing bilateral relations between Kenya and Saudi Arabia were discussed.

The two Ministers signed a Memorandum of Understanding between the Ministry of Foreign Affairs of the Republic of Kenya and the Ministry of Foreign Affairs of the Kingdom of Saudi Arabia on Political Consultations aimed at strengthening the existing friendly relations.
The Foreign Ministers also launched the first session of the Kenya – Saudi Arabia Joint Commission for Cooperation (JCC) and emphasized the significance of this inaugural session as the commencement of a new era of meaningful high-level engagements.

The two Leaders applauded the cordial strong bilateral ties existing between the two nations noting the significance of the inaugural JCC session as the commencement of a new era of meaningful high level engagements and cooperation in the areas of ICT; transport; labour and consular affairs; and development cooperation.
“The JCC framework sets the stage for deeper cooperation and reaffirms the close and robust relations that we have,” CS Omamo noted. 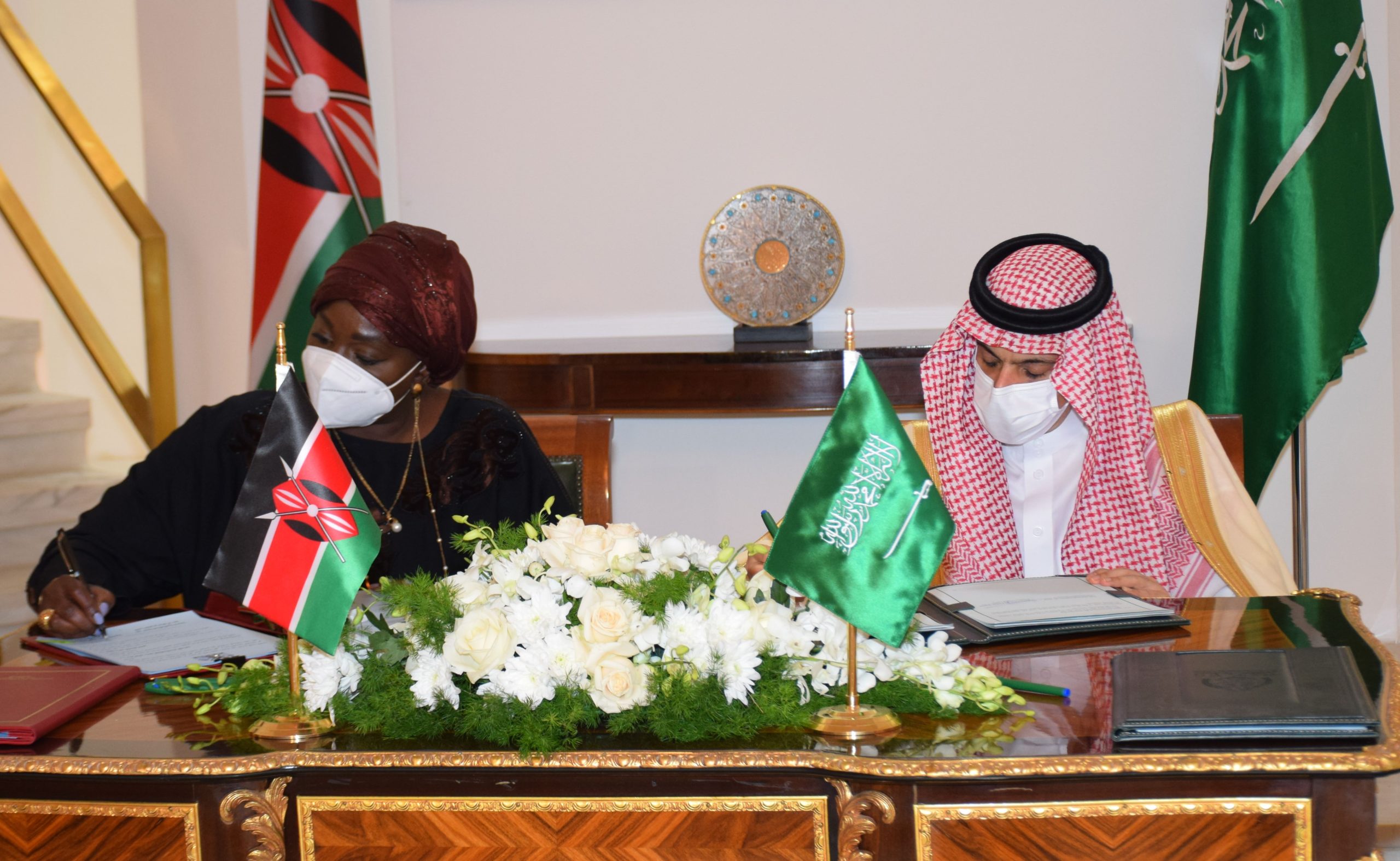 “I believe that this milestone is a manifestation of the fortitude that our countries and peoples have to deepen, reinforce and expand our relations of mutual interest,” the Cabinet Secretary added.
The Ministers resolved to continue working together and underscored the importance of holding regular JCC meetings to deepen bilateral and multilateral cooperation and diversify future cooperation in all fields for the mutual benefit of the two countries.

On the sidelines of the JCC, the Cabinet Secretary held bilateral talks with Dr. Abdullah Nasser Abuthnain, Vice Minister of Human Resource and Social Development for Labour in Riyadh. Discussions focused on labour and consular matters between Kenya and Saudi Arabia.
She also paid a courtesy call on H.E. Dr. Majid Bin Abdullah Alkassabi, Minister of Commerce and Investment of the Kingdom of Saudi Arabia. They discussed ways of strengthening bilateral relations, enhancing trade and investments and other potential areas of cooperation.

March 14, 2022
Epilepsy Safe Mode
Dampens color and removes blinks
This mode enables people with epilepsy to use the website safely by eliminating the risk of seizures that result from flashing or blinking animations and risky color combinations.
Visually Impaired Mode
Improves website's visuals
This mode adjusts the website for the convenience of users with visual impairments such as Degrading Eyesight, Tunnel Vision, Cataract, Glaucoma, and others.
Cognitive Disability Mode
Helps to focus on specific content
This mode provides different assistive options to help users with cognitive impairments such as Dyslexia, Autism, CVA, and others, to focus on the essential elements of the website more easily.
ADHD Friendly Mode
Reduces distractions and improve focus
This mode helps users with ADHD and Neurodevelopmental disorders to read, browse, and focus on the main website elements more easily while significantly reducing distractions.